A few months ago, I posted about a gorgeous girl who was in one of my classes that I became friends with. My idea of a HB9,  shes 27 and worked in the nightlife industry for most of her early 20's, dating drug dealers and dudes who live in Miami who fly her out and shit- Just to illustrate that shes one of those girls whos in high demand.

This past summer we've been hanging out, drinking together and hooking up. Thing is, everytime I would drink with this girl, we drink the same amount of alcohol but she always ends up getting black out and non responsive so we just pass out together without having sex. Seriously this shit happened everytime we went out together. She's slept at my place, I've slept at hers. I have never had this type of relationship with a girl where we hang out so much and my penis hasnt been in her vagina, but I actually enjoyed spending time with her, shes cool and smart and all that bullshit.

Recently, we've been hanging out basically every other night. Thurs night we were having a blast, dancing all sexual like, shes grabbing my dick, she fucking loves me, its mutual. We end up going back to her place, she starts stripping and drinking champange from the bottle "Drunk in Love" style. Shes was leaning against her kitchen counter and pulls down her pants. I took the liberty of pulling down her panties from there and eating her kitty from behind. We proceed to have about 5 mins of sex, then I can tell shes getting really drunk from that bottle she was chugging on earlier so I just carry her upstairs and we pass out naked on her bed.

Cut to next morning, we both wake up early bc we have to go to work. Shes all groggy and shit and asks me if we had sex. I say "yeah a little bit"  and shes all like "Ughh...do I need to get tested?" I laugh and say no. She ask me again about 10 min later. I say "No, do you think Im a whore" and she laughs and says yeah. Anyways we hug she says "I love you" and I leave her place.

She texts me later

Hey did you make it home ok?

Yah babe I did. Work is sucking a fat one right now lol

Wtf was I thinking

Im just trying to get a read on the situation as of now. She could be busy with school shit (finals week). Maybe her logical mind is telling her to take a break from me for awhile. She has verbalized that she efinitley thinks about her future more (marriage and kids) so maybe shes trying to get away from that "party girl gets drunk and has sex" stage. Any idea on what might be going on /  what to hit her up with that would allow me to gauge where shes at right now?

Im still going out, training, hitting up other girls, busy with new job shit etc. But this is kind of fucking with me, I find myself thinking about the situation and being distracted more than I would like.

A girl very much like this girl, had a very similar relationship with a guy. She asked me for advice. She ignored the guy for like a month because she thought she had done something embarrassing and was too embarassed to see him but really liked the guy. I would prob guess she's feeling insecure, is busy or she's hooking up w someone else and is acting sketchy because of that. I would guess prob one of the cost two if I was in your shoes.

A big part of it for the girl was that she had a big fear of intimacy that she never had to face being a party girl but because she was in her late 20s she was thinking of getting into a relationship. The guy had become someone she developed a friendship/connection and she was afraid of hooking up w him and it brought up all these insecurities. The crazy thing was that until I pointed it out it never had occurred to her he might have taken a month of her ignoring him as her not interested lol.

Do you want to date her?

Yeah I do. I've been going out hard for about three years now. The one night stands and fuck buddies are still fun and sex is great, but I can tell Im starting to become more drawn to the notion of having a relationship with a quality chick.

Ok be ready to pursue her then, because yes she's got her head wrapped around the steering wheel and you're going to have to hunt her down. Even if that means showing up at her house or her job, lol.

You read the "Fast & Furious" texting style I put up about a year back??

Of course. Definitley want to be cautious though, she has had issues with dudes stalking her in the past lol

What exactly do you think is going on in this situation

She's in demand bruthah. There is no right answer for this. I like what Manwhore said about hunting her down. She needs to get that feeling back that she had when she was with you. If your outta sight your outta mind. You could text her but she probably, no shit, has guys hitting her up from all over the country.

Yeah I agree, thing is I know if I push too hard she will be turned off. I dont have a lot of experience (aside from some negative references) with aggresively chasing over the phone. The dynamic between us has always been casual like "Im doing this tonight, wanna come?" and shes usually more receptive when I empathize (I'll post a pic below).

Ultimately I think the best approach would be to just let her take her time, keep it casual with her, invite her out here and there and let the tension from us being apart build up. Its been a few days and Im stressing less and less on it. We go to the same school so its more of a social circle thing than cold.

What I DIDNT like is how I reacted to the whole situation. I was getting SUPER not present and getting all worked up emotionally (even experiencing a bout of depression) thinking that I might not see her agian. I thought I had conquered these types of emotions and reactions when it came to the womenz, but I guess I had yet to be put to the test against a stunner who I had a great vibe with. Ultimately I see myself becoming more solid from this experience. Having said all that, I do intend to give her the D in the near future, and I want her to want me to give it to her. We just owe it to nature.

Closing, I think you hit the nail on the head with what you said about your similar situation. Im always interested in what goes through a chicks mind thats why I was asking MW his take on what the girls thought processes would be in this situation 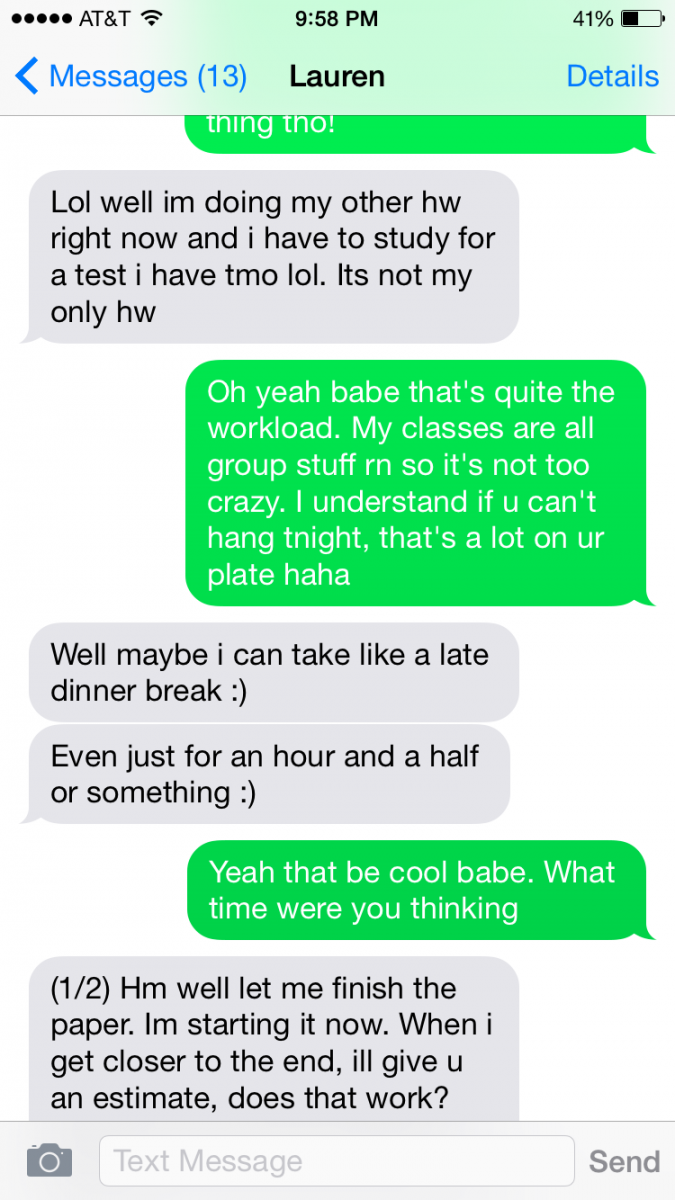 Don't mean to hijack this but I'm in a similar situation now..

Started hanging around old fb again 3/4 months ago. she opens the door to some more intimacy, getting emotional with me and says her bro misses me and we should all hang out again. We bang and everything is peachy afterwards and then she drops off. It's been 4/5 weeks since we've talked (she only sent me a snap saying how she missed a concert I went to). I got caught up with work and had a death in my distant family so I was out of town/occupied for a bit. I hit her up today with a simple hey pretty thang what are you up to today. And no reply.

I have ZERO clue where she stands emotionally or with us right now. Ain't trippin tho. Got 2 other wiminez right now but would definitely like to reestablish something here

She replied and near my area tn. Going to use fast and furious and gauge from there