Now THAT Was An AmazeBALLS Game! 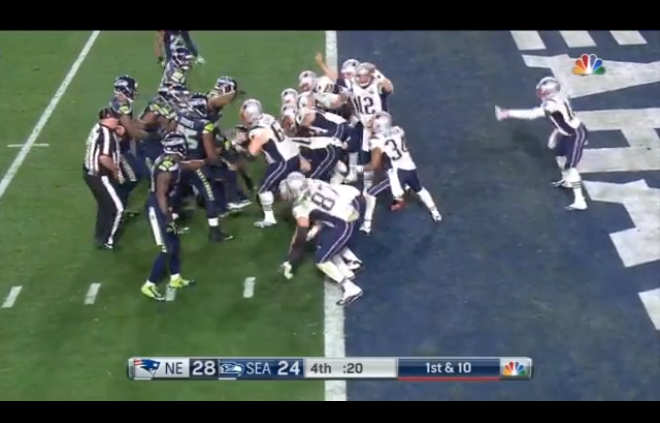 Had a parlay on the Over 47.5 and Seahawks win. Such poor play calling when youre that close to the endzone and you DONT give it to Beast Mode

I think the shit talking is utter nonsense. All this hysteria is crap. I know everyone's talking shit, but was it REALLY that crazy a call? Teams do it ALL THE TIME. Should it just be assumed that Lynch should get the ball when they're that close? DUH they're going to switch it up. Regardless that defender made a fucking GREAT play and he should get the credit.

I think we can all agree, if the Seahawks asked Madden, he would've suggested the hb dive

"There's no reservation in [the call] and don't make it out like there is,'' Carroll said Monday. "First off, Darrell is an incredible playcaller. He's done a fantastic job. We are so lucky to have him. He has been absolutely instrumental in what we have done. He is an awesome guy on our staff and crucially important to our future, as well.

"And let me say this, too. We don't ever call a play thinking we might throw an interception. I don't ever think that, just like [the 11-yard TD pass to Chris Matthews] with six seconds to go in the half. We go with what we know. There was not a thought in my mind that we would make a mistake on [the interception] play. It was a tremendous play by the guy on the other side."

Carroll went into detail about how the second-down call was part of a pre-planned sequence.

"We thought about our personnel who were coming in the game after the first play [a 4-yard run to the 1 by Lynch on first down] when we came up short, with three wide receivers in the game [on second down]. We had thought about throwing the ball there. That was part of the reason we sent that group in. When [the Patriots] sent their goal-line guys in, I know we have the advantage on the matchups in the passing game."

Carroll said throwing the ball always was part of the plan.

"One of those downs we were likely to throw the ball and maybe two of those downs," Carroll said, "depending on how we had to save the clock to get in all of our plays. It wasn't just run the ball. That wasn't what the thought was."

“Cleverness devoid of wisdom is extremely dangerous and destructive.
Enlightenment consciously chosen means to relinquish your attachment to past and future and to make the Now the main focus of your life.  Through allowing, you become what you are: vast, spacious. You become whole. You are not a fragment anymore, which is how the ego perceives itself. Your true nature emerges, which is one with the nature of God"
- Tollester